The second of the ‘twin’ temples of healing instituted by the Divine Hands, Sri Sathya Sai Institute of Higher Medical Sciences, Whitefield, Bengaluru turned 15 on 19th January this year. Celebrating the momentous occasion, staffers from the hospital assembled at the Sanctum Sanctorum this evening presenting a special programme at Bhagawan’s Lotus Feet. 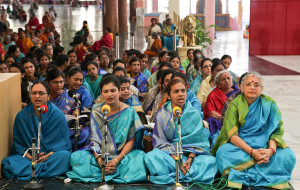 Where else one can find a group of professional medicos clad in white and white, clean shaven, gentle and neat, chanting Vedic incantations, “Na Karmana Na Prajaya….” invoking the Divine, out in the open, expressing no inhibitions, whatsoever, ??? 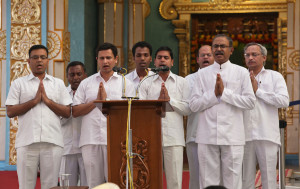 Prasanthi Nilayam is… you can have such Divine ‘righteous and truthful’ luxuries in the hallowed Prasanthi precincts, the Supreme Abode of The Mightiest One, Bhagawan Sri Sathya Sai Baba.

Uniquely, the programme this evening commenced with a reference to the Supreme Avatric sacrifice in the Treta, of Lord Sri Ramachandra, celebrating His Return to ‘Ayodhya’ (after His years of exile) for His coronation. Be it Sri Rama or ‘Our Own” Sai Rama, the lives of all Avatars have been a saga of sacrifices” echoed the voice of the hospital, linking up the times from two epochal Yugas, the Treta and the Kali, bonding the Oneness of Lord Rama and Lord Sai Rama… 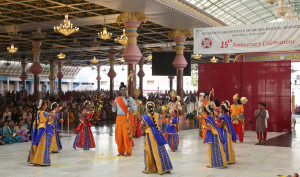 Deservedness comes from willingness and dedication. Brining in a beautiful connotation, the presenters, one each from the Treta and the the Sai era now, resounded that, as in the Treta, wherein the Vanaras were blessed by Lord Rama, much against the mighty mass with greater strength but lacking dedication and willingness, in the present time, all those who are working for Swami are His chosen ones, an apt reference to the hundreds of dedicated staffers at the hospital. 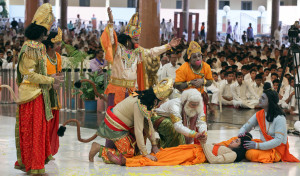 ‘Selfless service is what all should stand for…’ said Dr Sundaresh, Director at SSSIHMS, speaking on the occasion, enumerating on the all-round developments at The Temple of Healing. ‘The Hospital stands for quality patient care with love’ said Dr Sundaresh, speaking about the induction of ultra-modern equipments costing over 40 crores, aiming at effective patient care. At a personal note, he said, “I am very happy, for this wonderful opportunity”. Any attribute is inadequate to describe His love, and ‘trying to fathom the Divine’ is the mistake that we all make, instead of trying to follow His Footsteps.’ Dr Sundaresh had the rare great good fortune of being the chosen ‘doctor’ of The Supreme Doctor. 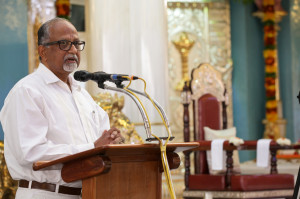 The programme entitled “Sri Rama Sharanam Mama” continued with a theme song, followed by Ramayana enacting, portraying some of the salient message-oriented episodes from the Epic. 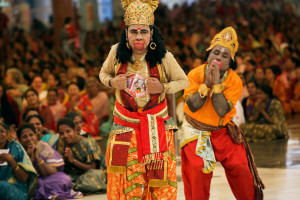 Bhagawan’s Divine discourse during the inauguration of the hospital next was followed by a qawwali. The session ensued next with a Ramayana scene of Hanuman exhibiting his heart’s content, “Rama”, portrayed brilliantly.

Sri K Krishna Kumar, a Chartered Accountant by profession and currently the Finance Controller at SSSIHMS, addressing the audience, spoke on the theme ‘Seva’, delivering beautiful anecdotes from his personal diary.

“Daiva Preeti” is the basis of all Seva” said Krishna Kumar delving in to the varied hues of the term Seva, from his practical perspective, learnt from his one-to-One interaction with Him. Concluding his inspiring practical-theory on ‘Seva’ from Bhagawan’s perspective, the speaker sounded, “Bhagawan’s Mission has been accomplished by Bhagawan HimSelf” for today and for the morrow…, indicating the imperative nature of the importance of Seva from the devotees’ point of view.

Times have changed… Avatar has changed His form… monkey have taken the shape of humans… but Sathwa…Dhairya…Viveka have never changed, the presenters summarised thus on the unbroken link from the times of Lord Rama to the present Sathya Sai era.

A final song in adoration “Sharanaya Karunamya” brought the curtain down for the doubly illumined, evening-turned-twilight that presented the unbounded fragrance of “Sai Ram”.

It turned out to be a brilliant saga of ‘Sai Rama Sharanam Mama’, an earnest attempt to emulate the foremost of Rama Bhaktas, Lord Hanuman, in effectively and devoutly serving the Lotus Feet of Sai Rama. 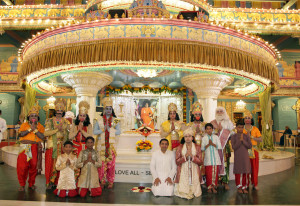 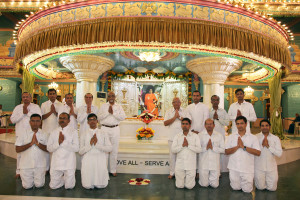